HE DID IT! AFTER A CHAMPIONSHIP MASTERED FROM START TO FINISH, BLACKPEARL IS CROWNED CHAMPION OF THE 2021 REGULAR SEASON ON CLASH ROYALE!

CAN BLACKPEARL ACHIEVE A DOUBLE?

Dominating the whole season, BlackPearl didn’t give any chance to the competition! If Tortel and Krypto seemed to be in the race for a while, the Flayn Esports player quickly put everyone in agreement. Indeed, with many wins against his direct competitors and only 2 defeats on the whole competition, he imposed a hellish rhythm that only he could follow. Finally, after a championship mastered from start to finish, BlackPearl can finally breathe a sigh of relief: He is the new champion of the Regular Season of the POST Esports Masters!

He will have the opportunity to pull a double win by winning the Invitational Tournament which starts on Saturday. He will be the favorite but it goes without saying that Tortel, Shy Guy, Wayes and all the participants of the tournament will play their best to surprise us! 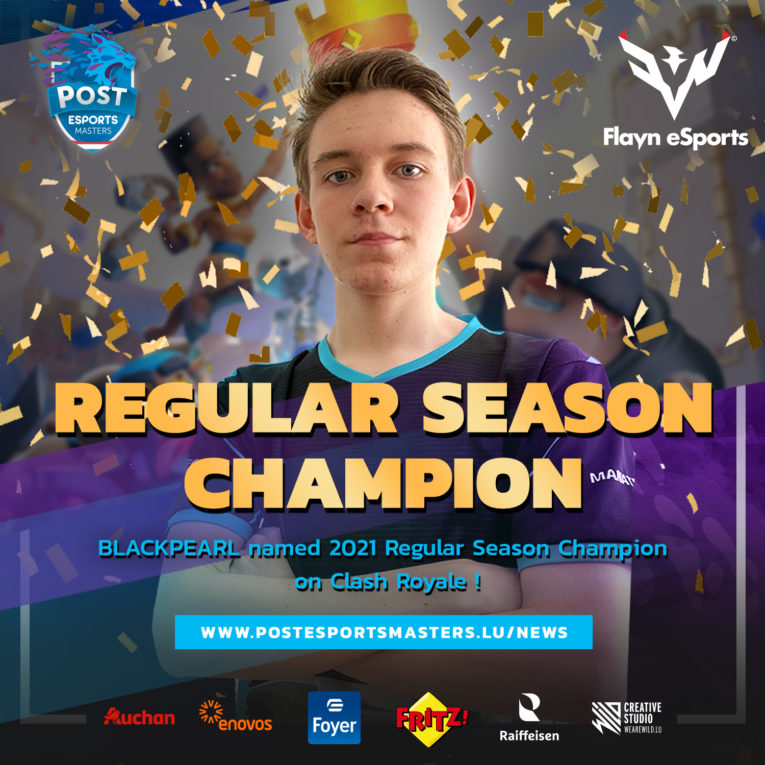 Behind BlackPearl the battle was hard until the last game to climb as high as possible in the ranking. The one who did it best is Shy Guy, who finishes the season with a bang, overtaking Wayes and Krypto at the finish line! Staying from 5th to 6th place all season long, the Royal Family player managed to fight his way to a beautiful 3rd place. He joins his partner Tortel on the podium!

Staying consistent, Wayes continues on his great momentum and secures the Top 4. Revelation of the 2021 season, the NBX player will have surprised many opponents from the beginning until the end! Krypto on his side loses another place and finishes 5th. There were clearly 2 stages in the Outplay player’s career: An incredible first part of the season (10 wins in a row to start with) and then a mixed result after the break. Favorite at the beginning of the competition, he will still be able to be in the light by playing a beautiful performance during the Invitational Tournament.

BERRY AND COOLIO, THE UNDERDOGS

Of course we find Berry and Coolio in places 6 and 7. In the shadow of the top 5 during the whole season, but never worried by their pursuers, the 2 players from Luxembourg have again pulled off a very solid regular season. To talk about regularity would be almost an understatement when you look at their ranking from the previous season. Indeed, in 2020 Berry and Coolio finished… 6th and 7th! They are now underdogs going into the Invitational Tournament and ready to beat the odds. It wouldn’t be a first time for Berry as he eliminated BlackPearl from the 2020 playoffs and made it to the podium.

Finally, the 8th place is stolen by Silent Voice who manages to overtake Mahdil, Orange, HerrbeniLP and Paolo Ios! He reaches the Cash Prize of the Regular Season and receives his entry ticket for the Invitational Tournament. 13th last year, what a great progression for the player who is starting to make a name for himself. Mahdil’s progression is also very good as he climbs from 17th to 9th place. It is unfortunately more complicated for Orange who goes from a semi-final in 2020 to a place outside the Top 8 this year. But no doubt we’ll see the Zeyro Gaming players again very soon.

FINAL RANKING OF THE SEASON

Here is the final ranking of the Regular Season. The Top 8 players share the €3,500 Cash Prize and get a spot in the Invitational Tournament (1st stage: June 29 / Finals: June 6 live on Twitch):

🖥 Watch the Invitational Tournament Finals on June 6 on Twitch:
https://www.twitch.tv/postesportsmasters

📊 Find all the results and standings on:
https://postesportsmasters.lu/clashroyale (schedule tab).