Unbeatable from the beginning to the end of the competition, BlackPearl won the title and achieved an incredible double: Regular Season Champion and Invitational Champion!

Throwback to the beginning of the Invitational tournament: 8 players were invited regarding their great performances.

A lot of surprises at the beginning of the competition! If Blackpearl and Shy Guy ensure as expected against Mahdil and Coolio, Tortel falls against Silent Voice, and Wayes against Krypto.

Unfortunately for Silent Voice, he won’t eliminate both Royal Family players one after the other because Shy Guy will take the upper hand in their semi-final. BlackPearl also defeated Krypto and joined Shy Guy for the Grand Final!

During the Loser Bracket, Tortel crosses paths with Krypto. A duel that reminds the finals of the 2020 playoffs! And just like last year, Tortel wins their opposition by the smallest margin (4-3). Wayes put an end to Silent Voice’s great run. After a suspenseful set, it is finally Tortel who joins BlackPearl and Shy Guy in the final stage at the Kinepolis Kirchberg in a 100% German final!

We knew that Shy Guy was capable of greatness against anyone. And he lived up to his reputation by pushing the Regular Season champion to the limit! After 6 games, BlackPearl and Shy Guy were 3-3 and needed a final set and extra time to break the tie. In the end, BlackPearl made the difference and sent his opponent to the Loser Bracket where he will face his Royal Family teammate in the Loser Final.

Naturally the favorite by his record, Tortel started with a psychological advantage. However, the stakes did not seem to scare Shy Guy who got off to the best start by dominating the beginning of the set (2-1). Unfortunately for him, the champion of the 2020 edition does not admit defeat and turns the situation to win the duel on the wire (4-3). Each opposition leads to scenarios so crazy that the commentators lose their voice!

BlackPearl, champion of the 2021 Regular Season against Tortel, champion of the 2020 edition. A magnificent match that was eagerly awaited by the viewers who came in great numbers on Twitch. And this Grand Final did not disappoint as it was intense and disputed. But the momentum this year is definitely on the side of BlackPearl, which leaves little chance to Tortel. As in the Regular Season, the champion plays his game and wins this final set 4-1! It’s done: the Flayn Esports player achieves a phenomenal double: Regular Season Champion and Invitational Tournament Champion! 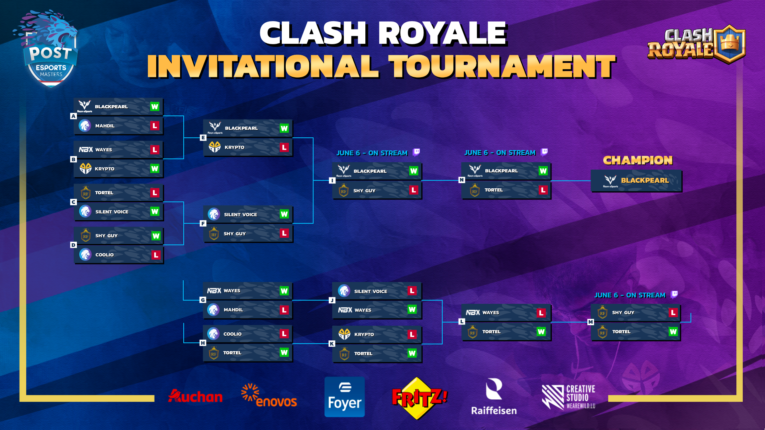 🖥 Watch replays of the finals on Twitch: https://www.twitch.tv/postesportsmasters