A few hours after receiving his title of Regular Season Champion, Fuoriclasse becomes the Invitational Champion! It’s official, he is the most successful player in the history of the POST Esports Masters!

Throwback to the beginning of the Invitational tournament: 8 players were invited following their great performances.

In this double bracket tournament, the ranking hierarchy was respected. In the 1st round only Diogo Santos made the prognosis lie by outclassing Abdoubrown. In the winner semi-final, Shadoow got the advantage on LouisLux, and Fuoriclasse sent Diogo Santos to the loser’s bracket after a very close set. The 2 leaders of the season qualify for the winner final at the Kirchberg Kinepolis.

In loser Bracket, Louislux again plays a bad trick to Abdoubrown and eliminates him from the tournament. Diogo dominates Bonvini_8 and they both have a chance to join Shadoow and Fuoriclasse at the final event of season 2. Finally it is the youngest of the competition, LouisLux, who takes the lead on his opponent! A new stunning performance for the young Luxembourgish who confirmed after an impressive Regular Season (4th).

The 3 finalists meet again on Sunday, June 6 at the Kirchberg Kinepolis for the final stage. During the Winner Final, Shadoow takes a first revenge on his rival by dominating their first leg confrontation (2-2 then 3-0). Beaten by only 3 points in the Regular Season by the Helios Gaming player, the Belgian champion is already laying a hand on the 2nd trophy of the season.

LouisLux starts the Loser Final by playing against Fuoriclasse. The stakes are huge and seem to weigh on the shoulders of the Luxembourg player who has trouble getting into his game. On the other hand, the Regular Season champion dominates the first game (5-0). Louislux offers a nice resistance in the 2nd set (1-1) but Fuoriclasse seems to be destined to find Shadoow to take his revenge.

The 2 best players of the Great Region will offer themselves an ultimate confrontation during the Grand Final!

FUORICLASSE IS ONCE AGAIN THE CHAMPION

The last game of the season starts with a bang! Fuoriclasse is back even fiercer than before and inflicts 2 goals in a row. Shadoow reduces the gap but it’s not enough, the Frenchman wins the 1st set (2-1). The tension is huge and the players hold each other for half a minute. But the momentum is clearly on the side of Fuoriclasse who wins the 2nd set (5-1), allowing him to reset the scores!

The suspense is at its climax! The title of Invitational tournament champion will be decided in 2 matches!

The tension reaches new heights: Fuoriclasse opens the score, Shadoow replies, Fuoriclasse scores twice to lead 3-1 but Shadoow comes back to 3-3! With only a few seconds left in the game, Fuoriclasse finally scored the winning goal to make it 4-3. One goal advantage for the French player before the last battle.

The atmosphere is unbreathable. The 2 competitors prove that they have an extraordinary mindset by giving each other blow after blow (2-2 at half-time). On the last straight line, Fuoriclasse draws on his resources and scores the freedom goal! It’s official, after having lifted his Regular Season’s Champion trophy a few hours earlier, he lifts a 2nd cup and achieves an exceptional double in the history of the POST Esports Masters! 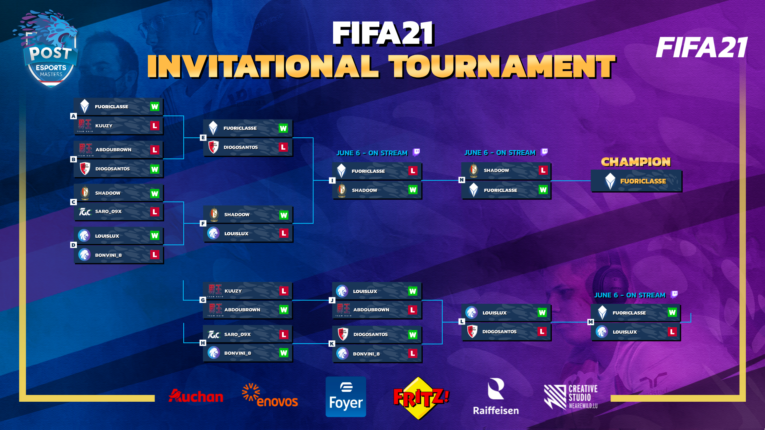 🖥  Watch the replays of the finals on Twitch: twitch.tv/postesportsmasters