AFTER ITS 2ND PLACE LAST SEASON, FUORICLASSE COMES BACK EVEN STRONGER THIS YEAR AND WINS THE 2021 REGULAR SEASON TITLE!

Fuoriclasse and Shadoow offered us an amazing long distance duel until the very end of the championship! Indeed, the 2 leaders of the competition won all their games during this last week of the championship, but the Standard de Liège player had to count on a mistake from Fuoriclasse’s to climb on the top of the leaderboard again! In the end, he lost on the smallest of margins (3pts difference) and it is indeed the player of Helios Gaming who is crowned champion!

The Frenchman will have the opportunity to pull off a double win during the Invitational Tournament which starts on Saturday and which will oppose the 8 best players of the Regular Season. Revealed during the 2020 POST Esports Masters season, Fuoriclasse already has the best record in the history of the competition (2nd in 2020, 1st in 2021). A new title would only embellish his fantastic record, but there is no doubt that his opponents will do everything to stand in his way! 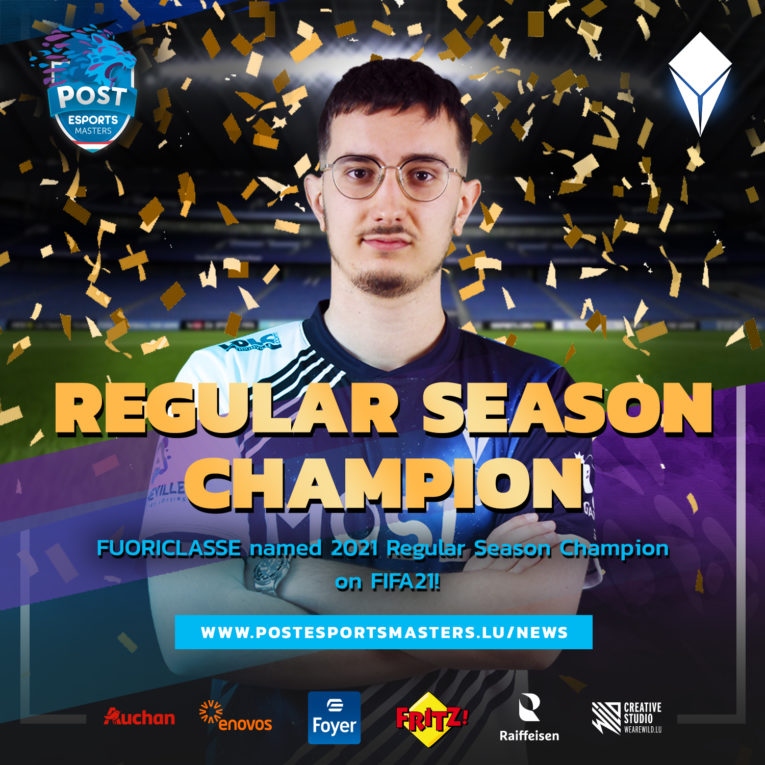 Another duel animated this last week of championship : Louislux vs Abdoubrown
MessiMaestro sits quietly at the 3rd place, DiogoSantos and Bonvini_8 too far in the ranking, the 4th place was played between the 2 players. Louislux had managed to hold a 3pts lead over Kaio’s player since mid-season and only had to last one more week to confirm his place in the Big 4 of the competition.

The scenario is exciting: with one game left in the season… LouisLux is still 3pts ahead! The last game of their season is a duel between the 2 players, all on live stream. The confrontation did not disappoint. LouisLux won the 1st game, Abdoubrown the 2nd, then Kaio player took the advantage in the last game (2-1). But the young Luxemburgish player did not break under the pressure… He equalized at 2-2 and then scored the winning goal in the 90th minute! 12th last year, LouisLux confirms his 4th place and signs the most beautiful progression of the year!

The 8th place of the ranking was still at stake. If Saro_09x had a lead over Kuuzyr7 before entering the final stretch, nothing was yet decided for the Team Game Changer player. His complicated schedule didn’t help him, but although he finished with a mixed record (1v-4d), it was enough to outrun the Kaio player who couldn’t take advantage of the opportunity to catch up.

Diogo Santos almost lost his 6th place to a very good Bonvini_8 but managed to keep his spot thanks to a very good last week (4v-1d). Both players have had a great season and will be able to complete their achievements starting Saturday at the Invitational Tournament!

FINAL RANKING OF THE SEASON

Here is the final ranking of the Regular Season. The Top 8 players share the €3,500 Cash Prize and get a spot in the Invitational Tournament (1st stage: June 29 / Finals: June 6 live on Twitch):

🖥 Watch the Invitational Tournament Finals on June 6 on Twitch:
https://www.twitch.tv/postesportsmasters

📊 Find all the results and standings on:
https://postesportsmasters.lu/clashroyale (schedule tab).