AFTER CLOSE DUELS AGAINST MAD TURTLES AND RELY ON, THE 2 BIGGEST ESPORTS STRUCTURES OF THE COUNTRY WILL MEET IN THE FINAL ON JUNE 5TH!

After great results in the group stage, Team Slick started as favorite against Mad Turtles, one of the new outsiders of the competition. The duel ended in a very balanced confrontation, so much so that it was difficult to predict the outcome of this semi-final before its very end. At 1:1 after the first two games, the two Luxembourgish teams were separated in a final game full of great plays. At the end of the suspense, it is finally Team Slick that qualifies for the final. Only 5th last year, J5KAS and his teammates will win at least the silver medal this year! A fantastic progression for this team which has relied on the experience and continuity of its players.

There was less suspense in the 2nd semi-final, but the game was still very good. If Outplay won the confrontation 2 to 0, Rely On realized a very honorable performance. Surprise team of the group stage like Mad Turtles, Rely On had nothing to lose in this stage of the competition. Facing the favorites of the competition, they proudly played their chance and held their ground during the 2 games.

However, Outplay was too strong and made it to the final without losing a single game. Boosted during the off-season with the arrival of Rakusi and Raitch (from Red Lions), the yellow and blue team will try to win their first trophy on Saturday, June 5. Defeated in last year’s final against Red Lions, the tournament favorites won’t waste this second opportunity to win the title. It won’t be easy with a Team Slick team that will do everything possible to beat the odds!

The Bracket of Challengers was decided by Red Lions’ victory over Nocturnal Esports and Royal Family’s win over Team Game Changer. They still have a chance to win the bronze medal.

Red Lions will face Mad Turtles and Royal Family will face Rely On in the Bracket of Challengers semi-finals. The 2 confrontations will take place on Saturday, May 29 and will be broadcasted live on Twitch! The 2 winning teams will then meet on Saturday, June 5 to play for the 3rd place of the competition. 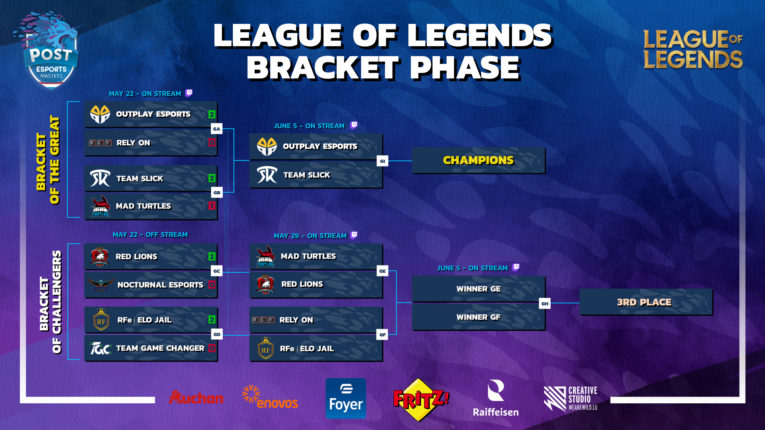 🖥 Watch the Bracket of Challengers semi-finals on Saturday, May 29 on Twitch:
https://www.twitch.tv/postesportsmasters