UNBEATABLE THROUGHOUT THE WHOLE COMPETITION, OUTPLAY ACHIEVE THEIR LAST OBJECTIVE AGAINST TEAM SLICK AND WON THE CHAMPIONSHIP TITLE!

The show was on with the climax of the League of Legends 2021 tournament! The final was a clear-cut victory for Outplay over Team Slick. The yellow and blue ogre lived up to its status as a favorite and overcame some strong challengers who can be proud of their performance. The podium was completed by Rely On who surprised everyone by taking down the defending champions after a suspenseful confrontation.

RELY ON CLIMB ON THE PODIUM

After winning their semi-final match, Red Lions and Rely On met again in the final of the Bracket of the Challengers, where a win would earn them third place in the tournament.

The two teams had not yet crossed swords in the competition, so it was difficult to pick a favorite. Champions in title, the Red Lions however started with a psychological advantage. This is confirmed in the 1st round of this BO3 which is largely dominated by Red Lions. We don’t give much of a chance to Rely On. But it is underestimating the outsiders who come back to the height of their opponents by winning largely the 2nd set (1-1). To conclude this beautiful confrontation, the teams offer us a last set with a breathtaking scenario. After having sent the ball back and forth for long minutes, it is finally Rely On that pulls its pin of the game to climb on the podium! A great performance and a deserved medal for this team that has been beating the odds since its arrival at the POST Esports Masters!

That’s it! Outplay are the champions! After their unexpected defeat during the finals last year, the yellow and blue team was eager to correct the situation. They did it with the manner by winning the Final 3-0 against Team Slick. The latter did their best but Outplay is simply too strong. Despite good resistance from Slick, the 3 rounds were one way. However, the latter have nothing to be ashamed of in terms of their performance, as the progress made since last year is admirable. Indeed, only 5th in 2020, Team Slick did not manage to get into the fight for 1st place. Without changing their squad and by focusing on stability, they managed to reach the finals this year by overcoming strong teams such as Rely On and Royal Family.

However, one team sits alone at the top and they are called Outplay! Undisputed leaders of Luxembourg, Rakusi and his team are champions and can enjoy it. One thing is certain: they will be back next year to try to keep dominating the local scene! 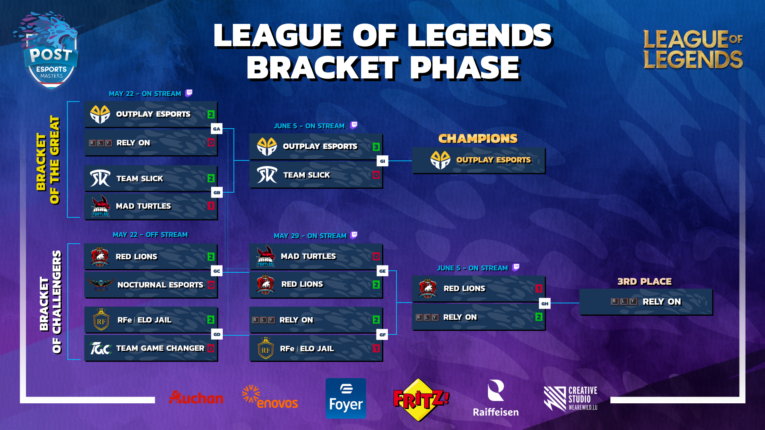 SEE YOU SOON FOR A THIRD SEASON!

Because yes… There will definitely be a 3rd edition! Thank you all for following this 2nd season of the POST Esports Masters with attention and interest. We look forward to seeing you again for a new and even more intense edition.

🖥  Watch the replays of the finals on Twitch: twitch.tv/postesportsmasters