Saturday and sunday the playoffs of the Post eSports league have been disputed live on Twitch, a show Luxembourg has never seen before! Inbetween crucial victories, heavy defeats and big suprises, thats what you need to remember about this weekend of esports! 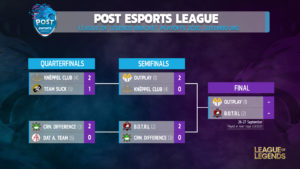 The playoffs started on saturday morning with the announcemwnt of the POTS Tim Shady. Winnig 7 times the man of the match award and beeing selected twice as player of the week, Tim Shady has won the race for the MVP title ahead of Dahmaan Drey and Deicara of Outplay, Happy Freezy of Corona Difference and Let it Roll from Kneppel Club. 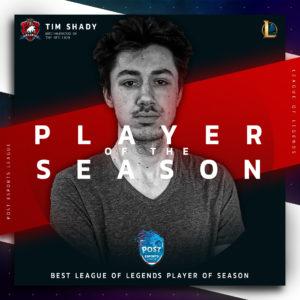 The two oldest Teams in the luxembourgish League of Legends Scene were facing once again in these Playoffs. Royal Family having performed really well throughout the season, even being able to take a win from BOTRL, started as favorite into this match up, but they always had a tough time playing against TSK. The latter drafting an easy to execute Teamfightcomb in the first game was really fitting their playstyle and with Royal Family not being able to use the heavy roam potential of their comb in the earlier stages of the game, the first game went to TSK. In the second game, TSK started off early going for the pressure composition, drafting a Syndra Botlane instead of a classic ADC which will later seal their faith as they won the early game but lost more and more pressure and fights as the game went on and Royal Family finishes the game. In the third game both combs were fairly similar with both teams having a lot of team fight potential, but Royal Familys definitely with the stronger “Wombo-Combo” potential and after a relatively calm Laning Phase, that really came into play and Royal Family was able to win the Quartefinals 2-1 after a very though set against Team Slick.

The surprising underdog Corona Difference faced off against Daat aanert Team. Corona Difference performed very well throughout the entire season and were even able to win against the heavily favourite Outplay Esports. They finished the season third, behind OP and BOTRL. On the other side, DAT, who made it to the Playoffs in the 6th spot, mostly due to the forfeit of Team Kaio and their Victory over North Bronze Side in the Tiebreaker. No one was really expecting DAT to stand any chance against Corona Difference and so this Best of 3 ended in a solid 2-0 for Corona Difference.

Game 1 : Brotherhood of the Red Lion vs Corona Difference

During the regular season, BOTRL won 2-0. However, it was expected to be a close game as it was the 2nd seed against the 3rd sead . 1st game was an absolute show of dominance by BOTRL, getting an early lead and snowballing throughout the rest of the game. BOTRL had an early game comb, where else CD would have liked to scale with their comb but they were trying to hard to adapt to the early agression of BOTRL and therefore lost. In the 2nd Game CD went for a Team Comb that could match the early agression of BOTRLs playstyle but as they were not used to playing this playstyle, CD was able to get an early lead. However, thanks to Tim Shady, the MVP of the season putting up an insane performance on his wukong once again and cheesycrispy struggling hard to do anything with his Lee Sin, BOTRL came back into the game strongly and the game ended up being decided by the “Jungle Difference”.

OP the absolute favorite of the POST eSports League faced off against Knëppel Club who were the underdog coming in to this matchup. Not only due to tehir bad record, but also because of the fact that they lost 2-0 during their matchup of the season. In the first Game OP was able to get an early lead as was expected, but RFe was really putting up a fight tearing out their undeniable lost with a very sneaky Baron for little longer – OP was simply more focused playing around the objectives better than RF. In the 2nd Game the Jungler surprised with Xin Zhao pick that was screaming: “lets finish this early” and with 4 Kills on the counter of OP after only 3minutes, all coming down to the early aggression of Xin Zhao and a nice roam from Jinsh to the Bot Lane. OP Dainank had an insane performance on his Aatrox on the toplane sometimes 1v2, 1v3 the team of RFe. OP had a lead from which RFe could never recover and with that OP was able to secure their spot in the Finals after only 20:55min of pure dominance. 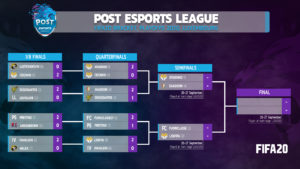 PLAYER OF THE SEASON – XFABINHO (Outplay)

Congratulations to Magic (Team Kaio) who takes the title of best Player of the season. Finishing the league as 1st and By winning 20 games and finishing the league at 1st, the underdog was simply more Constant Than the other nominees, BlackPearl (Enemity Esports), Krypto (Outplay), Shy Guy (Royale Family) and Orange, during the Wohle season.

Incredible set between the 2 players! Shadoow wins the first game 5-4 after overtime although Diogo led 4-2 at halftime. The game 2 continued followed the same pattern as Shadooz quickly led 2-0 before Diogo Santos managed to tie it up at the 88th minute! Leading to another overtime! Diogo quickly takes the lead 3-2 before being caught up 3-3… and then scoring the goal for the win at the 122nd minute! Unfortunately for the Luxemburgish player, Shadoow takes the advantage in the final game 3-1. Diogo Santos falls proudly, and it’s the belgium champion who is the first one qualified for the semi-finals.

The beginning of the playoffs for the newly named Player of the Season has been noticed as he was able to overtake his teammate from Outplay without any difficulty. From the start of game 1 Fabinho imposed his rythmn and led 3-0 to finally win the 1st game 3-2. The 2nd game was one sided, Fabinho took an early lead and did not lift his foot off the gas pedal as he ended the game winning 6-1! After a nice run during the season (Top 8 of the league) Ciscinho is defeated. After a lot of years as the number 1 player of Luxembourg, it is maybe a turning poin in the esport scene of the country, with Fabinho taking his place!

2 outsiders of the competition have met in a quarter final that promised to be balanced. The promise was shown true from the tip off with an intense game until the last minute of the match. Prestino took the advantage quickly before being tied by a Fuoriclasse penalty. Strong until the end, Prestino scored once more and took the advantage of the best of 3. But it was without counting the strong mental of Fuoriclasse who proved that his 2nd place at the standings was not stolen winning the second game 3-0! The french player dominated Prestino once again in the 3rd game of this quarterfinal winning 4-1 enabling him to advance to the semi-finals! Fuoriclasse arrived from nowhere at the start of the season but got noticed right away. With a Top4 now secured at the POST eSports League, he is making a name fro himself on the eSport scene of the Greater Region.

Everybody was expecting an unequal game between the 2 players who were really close in terms of results during the season. LxBFifa decided otherwise by showing his true level of play as he beat Ivanilson so bad that he forfeited the 2nd game before the end! Still unknown from the FiFA tournaments, LxbFIFA, just like Fuoriclasse, managed to make a name for himself! 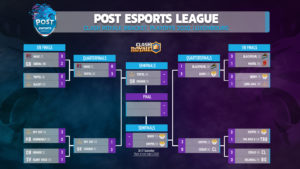 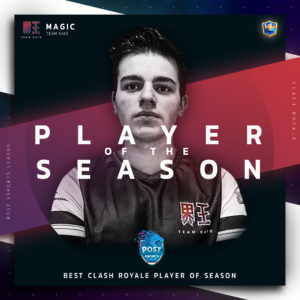 The Clash Royale playoffs started without surprise with no upset on the clock. It was not a pleasure for the qualified. With the exception of Shy Guy and Coolio who won their set 3-0 respectively against HerrBenilp and B3lgraal, all of the challengers managed to win at least 1 match. Tortel defeats his teammate Blacky 2-1, Orange eliminates Silent Voice 3-1, BlackPearl takes over 3-1 over Mahdil from DuXedom Esports, Berry dominates Lord Luka of Royal Family 3-1, Krypto eliminates 3-1 The Boss 8, and special mention to Gibona who, despite his 16th place in the standings, pushes Magic to its limits (defeat 3-2).

What an unexpected scenario! Magic from Team Kaio, number 1 at the standings and MVP of the league loses against Tortel from Royal Family (3-0) only a few minutes after being named Player of the Season! The matchup was, however, more indecisive than the ranking of the players makes it seem. Indeed, even though Tortel ended the season as the 8th seed, he is a big name in the Clash Royale scene, with multiple victories in tournaments. Magic, one of the youngest players of the POST eSports League was unfortunately caught up by his lack of experience. No doubt that he will be coming back stronger than ever. Tortel, on his side, joins the final four and makesp eople forget his bad end of the regular season.

The unexpected scenarios continue, as Orange, new challenger on the Clash Royale scene, eliminates Shy Guy from Royal Family on a 3-1 score. The latter had finished the season on an incredible note as he almost reached the Top 3. Unfortunately for him, the Player of the Week 7 decided to come up with a big game and take the semi-finals from him and prevent Royal Family from sending 2 players into the final four.

But it is not the end ! Berry of Outplay, who finished the season in 7th position, eliminates BlackPearl of Enemity eSports to everyone’s surprise after a crazy set, bringing down the one who was considered by many to be the big favorite of the competition. After an overwhelming victory in the first round, the German player of Enemity is surprised by Berry in the 2nd round. The 3rd game was the turning point in the series with a spectacular finish, with the Outplay player winning the match after overtime when BlackPearl literally only needed a second to equalize. Berry riding his winning streak continues with a third consecutive victory and eliminates one of the leaders in the category!

The only survivor of the Top 4 of the season, Krypto de Outplay confirms his status as number 1 in Luxembourg, overthrowing Coolio 3-0 after an expeditious set. With the elimination of Magic and BlackPearl, he recovers his status from the start of the season: that of favorite for the champion trophy. Be careful, however, not to underestimate Tortel, Berry and Orange who showed this weekend that they were capable of lying any prognosis.

The semi-finals will be Krypto against Berry (a 100% Outplay match) and Tortel against Orange.

SUMMARY OF THE ESPORTS TEAMS

In summary, the favorites confirmed their status on League of Legends and FIFA20, while nice unexpected surprises happened on Clash Royale. The representatives of Team Slick, Team Kaio, Enemity Esports and the FC Progrès Niederkorn falls during the playoffs, while Royal Family and the Standard de Liège manage to reach the last stage of the competition thanks to Tortel and Shadoow. Imposing their domination on these playoffs, Outplay qualifies for the finals on League of Legends and qualify 4 of their players in semi-finals on Clash Royale and FIFA20. The only player of the Luxembourgish team to have lost during these playoffs is… Ciscinho against his teammate xFabinho! However, he could not have done better.

The finals and semi-finals will be played on the main stage of the LGX2020 the 26th and 27th September and are already making all of the fans of esport of the region tremble in impatience, as they are awaiting the conclusion of the competition!