IT’S TIME FOR PLAYOFFS! After a season full of twists and turns, we are entering the final stages. Who are the favorites, should we expect surprises? discover the summary of the season discipline by discipline!

Watch the POST eSports League playoffs live on Twitch Saturday 4th and Sunday 5th July!
Follow us now on our channel and turn on the notification bell to be notified as soon as the competition starts: https://www.twitch.tv/postesportsleague
After an unbelievable season full of twists and upsets, the teams and players are only waiting for one thing: starting the playoffs and reach the finals which will happen on the 26th & 27th September at the LGX2020.

The debate has been ongoing for the past 2 weeks: Who of Outplay and Brotherhood of the Red Lion is the best team of the POST eSports League as we are about to begin the playoffs? After finishing in a tie for the first place of the standing (12pts) at the end of the season, the two Luxembourgish teams kept the suspense going while waiting for the tie-breaker, or the extra game in order to establish the number 1 team.

The high-stake game ended on a 1-0 victory from Outplay who decided to send a strong message to their rival!

The yellow and white team therefore finish the season first, enabling them to go straight to the semi-finals where they will meet the winner of the game between Team Slick and Knëppel Club, respectively 4th and 5th. The red lions end up 2nd and will therefore have a more complicated playoffs race. If they also manage to go into the semi-finals, they will meet the winner of the game opposing the 3rd and 6th seed. Except if Dat Aanert Team (6) manages an incredible feat, they will meet Corona Difference (3), the surprised team of the season.

Without any doubts on of the most equal fights of the playoffs. Beyond their close seeding during the season, the two teams ended in a tie during their regular season game. Knëppel Club was, however, able to surprise everyone by getting a tie during their game against B.O.T.R.L (2nd), showing that they have the capability of increasing their level of play against better opponents. Will they manage to do the same in a high-stake game?

On the paper, the game is one sided seeing how different the 2 teams were during the season. On one side, Corona Difference proved everybody wrong by finishing 3rd, and by showcasing powerful performances like the draw against Outplay and the player of the week title for their captain Happy Freezy. On the other side, it was a tougher road for Dat Aanert Team who managed to lock in the last spot for the playoffs after an incredible win during the Tie-Breaker against North Bronze Side. No pressure then for D.A.T who position themselves as the outsiders ready to create surprise during the playoffs.

SEMIFINALS – Game C: Outplay (1) vs Winner of Game A

SEMIFINALS – Game D: Brotherhood of the Red Lion (2) vs Winner of Game B

Outplay and Brotherhood of the Red Lion are already qualified for the 2nd round of the playoffs thanks to their impressive regular season. The ambitions of the 2 teams are clear: Win the semi-finals without leaving any chance to their opponent in order to find themselves in the highly anticipated final of LGX2020!

See the playoffs of the POST eSports League live on Twitch Saturday 4th July 2020 from 10AM to 6PM!

Follow us right now on the channel and turn on the notification bell to be notified as soon as the competition starts: twitch.tv/postesportsleague 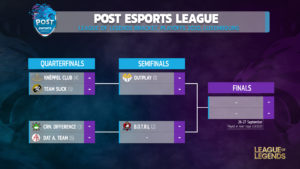 There was only one game left to be played before the playoffs, but there was a certain stake to be played during this last week of regular season. Indeed, the level of play has been so homogeneous during the season that the standings has been again completely changed a few days away from the playoffs!

We were awaiting with impatience the game opposing the 2 players ranked first in the standings! In this incredible game, xFabinho managed to overtake LxbFIFA (2-0) locking in the 1st place (39pts) and the easiest playoffs bracket of any players. With this loss, LxbFIFA falls to 3rd place allowing Fuoriclasse to jump to the 2nd spot (36pts). Fuoriclasse who played incredible ever since the beginning of the season, impressing with his regularity, the French outsiders unknown of the eSports scene is the only to have won 2 Player of the Week titles and to have stayed in the top 3 throughout the entirety of the season.

The top 4 ends with Shoadoow of the Standard de Liège who wins his last game against Ciscinho of Outplay, xFabinho (1), Fuoriclasse (2), LxbFIFA (3) and Shadoow (4) manage to advance directly to the second round of the playoffs and prevent themselves from a game in the eighth of finals (bracket of the playoffs below).

Even though we already had 11 players qualified for the playoffs last week, the 12th and final spot was still up for grabs. LouisLux, who had been stuck on that spot for more than a month, let DidiStorm and EricGaletto come back up the standings (9pts) offering us at the same time some nice suspense for the end of the season. Hopefully for him, he was able to correct his mistake by winning his last game against EricGaletto, qualifying himself for the playoffs at the last moment. 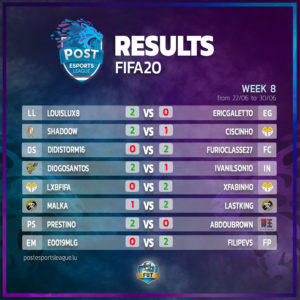 (Find the playoffs bracket at the end of the “Fifa20” text)

2 big names of the Luxemburgish eSports scene will battle it out as soon as the eighth of finals, showing how high the level of play of the 12 qualified players is for the playoffs. Used to big elimination games and the pressure of great moments, the players of Team Slick and Outplay will probably be at their highest level from the start of the game.

As their standings show, this is the most unequal game on paper. DiogoSantos is the favourite due to his successful season and a title of Player of the Week, but he should not underestimate LouisLux at the risk of having a bad surprise.

Nice surprise of the season, Prestino managed to keep a high level of play during 2 months. Showcasing nice performances, he notably won his game 2-0 against AbdouBrown during the season. The player of Team Kaio has experience on his side (esports player since 2014) and will take advantage of his ability to perform under pressure to take on Prestino.

With Fuoriclasse and Prestino, Ivanilso is a part of the outsiders than not many saw going this far at the start of the season, but that lots of people are now looking to avoid in the playoffs. Unfortunately, it is not the case of Malka, who was awaited during the season as he is a well-known player in Luxembourg. Real business is now upon us and the player from team Slick knows that his complicated season will be instantly forgotten if he manages to pull off the upset and qualified for the quarter finals.

The 4 games of the eighth of finals opposing seeds (5) to (12) will be played Saturday 4th of July at 3:00PM (off stream). The winners of these Best of 3 games will join the top 4 in quarter finals for high pressure games!

All of the quarter finals games will be streamed live Sunday 5th of July starting at 2:00PM on the official Twitch channel of the league!

We were really spoiled with this first season of the POST eSports League! Indeed the suspense has been incredible in the 3 games until the end of the regular season!

And Clash Royale is no exception. Magic finishes the season 1st of the standings to the surprise of everybody, making the prognostics lie as he won against the top players of the league who are already well known in the Luxemburgish eSports scene. He also managed to win the title of favourite of the competition to his brother, Krypto, he ends his season by winning his game against Tortel (2-0). Highlight of the show… he signs with Team Kaio and will be representing the French team during the playoffs!

The battle for 1st place was played until the end of the season. BlackPearl, the leader during a big part of the season finally ended 2nd, tied with the number of points to Magic (20pts), but behind in the goal-average of… -1! The player from Enemity finished with +29 against +30 for the new player of Team Kaio.

On his side, Krypto from Outplay, top 1 of Luxembourg, finishes 3rd after his victories against Silent Voice and his teammate from Outplay, Berry. Shy Guy completes the Top 4 with a nice rise to the top in the last few weeks.

Finally, after an unstoppable battle for the last spots of the playoffs, it is finally Gibona and Mahdil who manage to snap them! Cruel scenario for Aubx, only women who was pretending for a spot in the playoffs, who finshes 16th during the last week of the season! 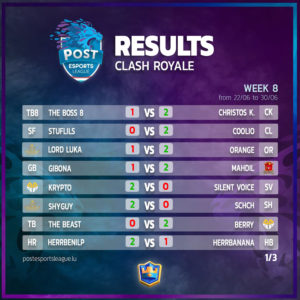 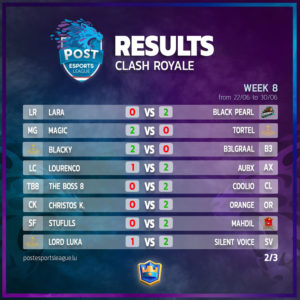 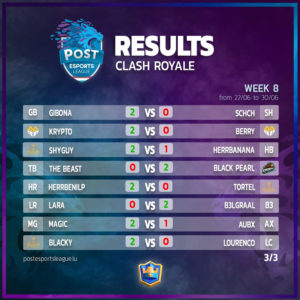 (Find the playoffs bracket at the end of the “Clash Royale” text).

The most unequal game of the playoffs! Gibona will need to up his level if he wishes to win against Magic!

2 players from Royal Family. Tortel was amongst the favourites going into the season but has been struggling the past few weeks, while Blacky was always in the middle of the standings and consistent during all the season.

Shy Guy is one of the favourites of this competition. The multiple Luxemburgish champion has been heating up in these past few weeks and HerrBeniLP will have to offer his best game if he wishes to be competitive.

Orange has his moment of glory not long ago, being named Player of the Week. Silent Voice, player from the shadows but consistent throughout the whole 8 weeks of competition has nothing to lose, he was not a favourite and he knows it.

Just qualified for the season at the end of the season, Mahdil will be playing against one of the favourites for the title. For BlackPearl, he is aiming for the finals, the eighth finals should not be any problem for him.

Respectively representing Outplay and Royal Family, the 2 players have shown the best and the worst during the regular season. Sometimes irregular, they are also capable of amazing games.

Head to head unequal on paper between the number 1 Luxemburgish player and The Boss 8, new challenger of the esport scene.

Coolio is one of the most consistent and solid player of the league. Diverging between the 8th and 5th place in the standing, he is the favourite to win against B3lgraal, who even though he was never in danger of not making the playoffs, did not have any upsets either.

The 8 games of the eighth of finals opposing seeds (1) to (16) will be played Saturday 4th of July at 3:00PM (off stream). The winners of these Best of 5 games will join the quarter finals for high pressure games!

All of the quarter finals games will be streamed live Sunday 5th of July starting at 2:00PM on the official Twitch channel of the league!

There are no #PlayerOfTheWeek nominations this week because there weren’t enough games to choose a player. However, we invite you to remember the last race for the best player of the season, it was 1 month ago and here are the players who were leading the way: 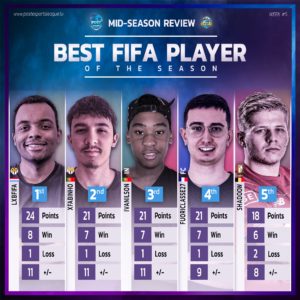 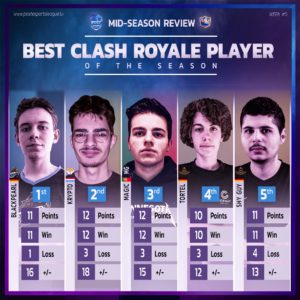 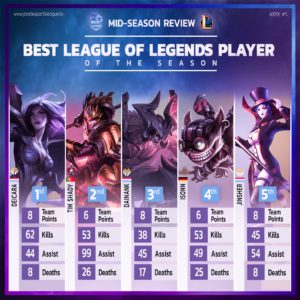 The 3 BestPlayerOfTheSeason will be named during the stream !