SHADOOW GOES BACK TO FUORICLASSE, MESSIMAESTRO71, LOUISLUX AND ABDOUBROWN ARE FIGHTING JUST BEHIND… WE TELL YOU EVERYTHING IN THIS SUMMARY OF THE 4TH AND 5TH WEEK OF THE CHAMPIONSHIP!

A lot has happened in 2 weeks! In terms of performances on one hand and out-game events on the other hand. Indeed, before attacking the analysis of the performances it is important to notify that xFabinho and LxbFifa decided to give up the competition. This decision upsets the ranking at 2 levels:
First of all, the race for the 1st place is now between Shadoow and Fuoriclasse. The Belgian player and the French player offer each other a monumental duel at the top by still not managing to tie-break. Secondly, it is the accession to the top 8 which is upset with 2 released places, of what gives hope to several players who will play their chances until the end (Bonvini8, Saro_09x, Kuuzy).

The fight between Shadoow and Fuoriclasse is exciting! Following some great performances over the last 2 weeks, Shadoow has managed to overtake Fuoriclasse in the rankings (72pts against 69pts). However, Fuoriclasse is only 1 game behind and can still catch up before the end of the week. Since the resumption (10 games), they have each lost only one game, respectively against LouisLux for Fuoriclasse and against MessiMaestro for Shadoow. The players from Helios Gaming and Standard de Liège are almost invincible and seem being able to be worried only by the top players of the championship.

However, it is Shadoow who will have to face a very complicated schedule during the last week of competition. He will face : LouisLux (4th), Adboubrown (5th) and DiogoSantos (6th). Fuoriclasse will face Messimaestro71 (3rd) and Bonvini8 (7th), as well as Kaio’s players (Kuuzy and Kim) that he knows very well after their numerous derbies in Lorraine.

Stable at a very high level since the beginning of the season, Messimaeastro71, LouisLux and Abdoubrown have never gone lower than a 6th place in the general ranking. Not surprising when we know that the 3 players concluded all their week in positive (minimum 3 victories on 5 games). Messimaestro71 has however taken a near-decisive lead on these 2 rivals by winning their direct confrontations during the last 2 weekends. The player of Team Slick continues to rise in power and seems to have secured his place on the podium (6pts of advance on the 4th). He also takes advantage of this to win the title of player of the week 4! A podium finish in his first year in the competition would be a great achievement for this player who was still unknown on the Esports scene a few months ago.

LouisLux shows very good things by being the only one to knock down Fuoriclasse for ages. This victory of the Luxembourg player is essential because AbdouBrown is coming at full speed to try to steal his 4th place in the overall ranking. The Kaio player is currently in great shape and is having a solid week. With a game behind LouisLux he can hope to move up to 4th place if he wins with a good goal-average. 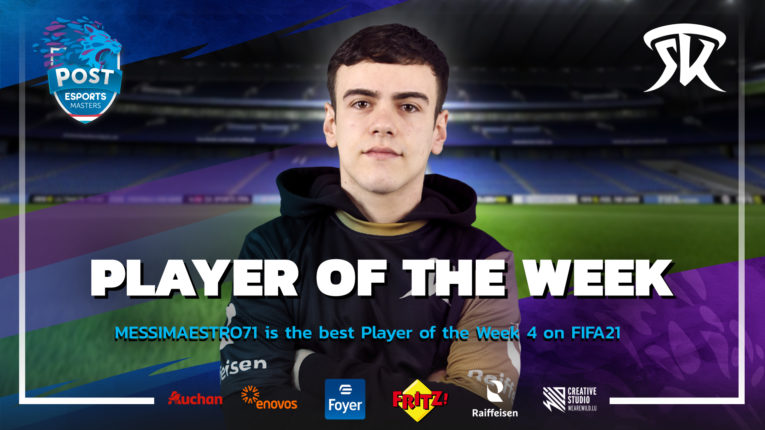 The race for the 8th place becomes more and more exciting. LxbFifa out of the game and Ivanilson in a bad shape, Bonvini8 and Saro_09x take the opportunity to climb in the hierarchy and take away their 7th and 8th places thanks to solid performances. Ivanilson can still reach the top 8 but it will be difficult for Kuuzy who will have to make a perfect performance (5W-0L) and hope for defeats of the above mentioned players to reach it.

Diogo Santos seems to be safe in 6th place. The Swift Hesperange player missed the opportunity to fight for the podium after a few losses against direct competitors. However, he is in a good position to try to make a good performance at the Invitational Tournament. Indeed, playing against the historical number 2 of Luxembourg in the 1st round of a bracket looks like a trap match!

On the one hand to access the Cash Prize of the regular season because the €3.500 are divided between the 8 best players and on the other hand to obtain a place in the Invitational Tournament. The Invitational Tournament will be played in Double Bracket between the top 8 players of the regular season and the Top 4 of this tournament will be played live on Sunday June 6th.

🖥 Attend to the best of the season every week-end on https://www.twitch.tv/postesportsmasters

📊 Find all the results on https://postesportsmasters.lu/fifa (schedule Tab).