The 2022 Finals have delivered their verdict!

After breathtaking matches on stage at the Luxexpo The Box, Rift Sloths are crowned champions of the POST Esports Masters on Rocket League following their victory against Minkz! See you in 2023 for the 4th edition of the biggest Esports championship in Luxembourg!

The finals have given their verdict! After 6 months of competitions, we finally know the name of the champions of the POST Esports Masters on FIFA22, Clash Royale and Rocket League!

After an amazing championship, the best Rocket League, Clash Royale and FIFA22 players from the Greater Luxembourg Region will compete on stage at Luxexpo The Box in the hope of being crowned champion! (25-26 June)

Watch Panorama every monday on 11F Gaming social media, the show that talks about all everything what you need to know in Luxembourg!

The biggest Esports competition in Luxembourg is back! Rocket League makes its debut in the POST Esports Masters for this 3rd edition!

POST AND ACL LAUNCH A BRAND NEW COMPETITION ON THE ROCKET LEAGUE VIDEO GAME! 32 TEAMS, 2,500€ TO WIN, A 16H STREAM… REGISTRATIONS ARE OPEN!

Get your tickets for the finals!

Get your tickets to attend the POST Esports Masters finals at Luxexpo The Box on June 25 and 26, 2022. 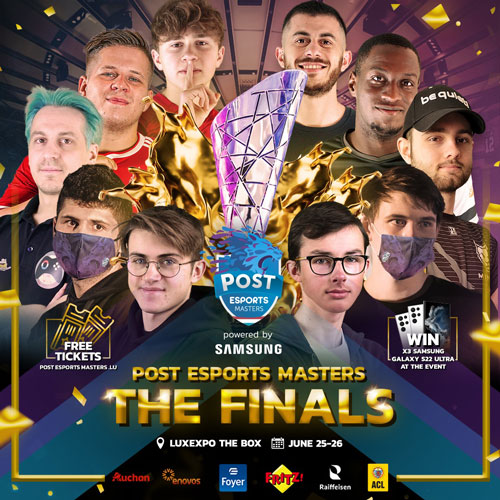